So the rumor floating around is that the console version of Elder Scrolls Online is being delayed by 6 months. And by rumor, I mean an apparent FAQ post made by Bethesda that was eventually removed and, of course, screen-capped by someone in the Reddit community beforehand.

As posted on Reddit by user dolessgetmore, this appeared on the game’s FAQ:

“When does The Elder Scrolls Online officially launch? The Elder Scrolls Online officially launched on April 4, 2014 on PC and Mac. While it has become clear that our planned June release of the console versions isn’t going to be possible, we have made great progress, we have concluded that we’ll need about six more months to ensure we deliver the experience our fans expect and deserve. For additional information on the delay, please see this blog post (link)”

This information was then, as I understand, removed by Bethesda, and some folks sharing the information on any form of social media outlet have had their posts removed and/or banned (according to the Reddit post) by Bethesda themselves. I can’t say if that’s true or not, but this screencap of the FAQ has surfaced, showing the delay information before it was removed. Click for the full sized image. 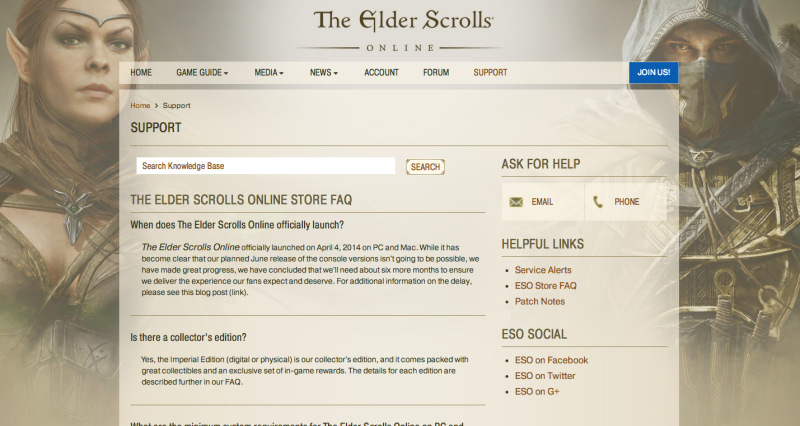 Without a formal announcement from Bethesda, we’re going to go ahead and take this with a grain of salt. Honestly, delaying the game six months wouldn’t be the end of the world since anyone actually waiting for the console version obviously has no intentions of playing the game on PC.

If they do end up delaying the console version by 6 months, what would you like to see them do with that time? As someone familiar with the PC version, I’d really like to see some sort of central auction house, as currently you’re forced to join a guild and sell within the guild’s auction house instead. This is a terrible, terrible idea and probably the thing I loathe most about the game.

I’d also really like to see them make the PS4 and Xbox One versions cross platform, as the console player-base will definitely not be as large as the PC‘s, and I’m already starting to see tons of barren zones with little to no traffic aside from bots or gold sellers.

Bethesda has already confirmed that they will not require a PSN Plus subscription to play Elder Scrolls Online on the PS4, but Microsoft will still require an Xbox Live Gold subscription for the Xbox One version. Forcing owners to pay two subscription fees is a bad idea in my book, but in this day and age, who doesn’t have Xbox Live Gold or PSN Plus that owns a current-gen console?

What’s your take? Are you even interested in Elder Scrolls Online for consoles, or are you playing on PC? Let us know!