Whenever Nintendo releases a console, you can expect a couple of things. One, a Super Mario game; a Legend of Zelda game; and finally, a new Mario Kart. Having already released Super Mario Bros U and Super Luigi Bros U, and with Hyrule Warriors set to release in Japan on August 14th, that leaves only one franchise to grace the Wii U. And that brings us to Mario Kart 8.

How can we be at eight titles already? Well, considering the original game came out in 1992, very easily. But with gravity-defying tracks and beautiful visuals, Mario Kart 8 brings a fresh spin to the classic franchise.

The first thing I noticed while playing was just how gorgeous the graphics were. The environments were full and lush, with all the glory of fantastic framerate. The designers left no stone unturned, either. Not only are the landscapes just beautiful, but small details were noted. Diving into water leaves droplets on the screen and your tires pick up whatever is on the road. The color schemes are bright without being overwhelming, and the twists from normal course to anti-gravity are smooth without making one feel too dizzy.

To go along with amazing visuals is an amazing soundtrack. Every track has a music theme that captures the mood of the track perfectly. One of my favorites was 3DS DK Jungle, which had some amazing piano riffs and saxophone to get your head bobbing while you’re shooting red shells left and right.

The environments affect the background music as well. Certain tracks like 3DS Music Park has you driving over piano keys and drums that play a counter-melody to the track, while the Electrodome takes you to the techno side. You’ll hear the music cues for certain power-ups, like the dreaded Blue Shell, or a frenzied, disharmonic variant when you get hit by a Thunderbolt.

Power-ups make up a good portion of the racing dynamics, as they always have. Fans are introduced to a couple of new ones, such as the Boomerang, which allows you to fire it three times and hit anyone within range. Next is the Super Horn, which emits an area-effect blast to knock back other racers or track NPCs. The Potted Piranha Plant has a short range but a great bite against track hazards or other players.

The best of the new power-ups is the rare Crazy 8, the polished older brother of Mario Kart 7’s Lucky 7. Imagine a ring of power-ups spinning around you, and you can use all of them. Bomb, Star, Red Shell, and more. It’s all there for you to use, and usually pops up in moments of desperation.

Mario Kart 8 introduces new features such as the Spin Boost. On zero-G portion of the tracks, hitting another player doesn’t send you spinning out of control. Instead, you gain a short boost and the ability to laugh in your opponent’s face. However, if you’re playing as a lighter character and crash into a heavier one like Metal Mario, you will bounce off, so play carefully.

Zero G is the most noticeable of all the new mechanics. Pretty much every track has something that will have you either driving on a twisted track, or shooting into the air for a quick glide. On some, the anti-gravity is barely noticeable. Other tracks, like N64 Rainbow Road, you’re treated to an upside-down view at the stunning city. The shift between normal orientation and the upside-down spectacle is remarkably smooth. Very rarely did I ever feel dizzy or that the game jerked into it. The underwater mechanics just as phenomenal. You will notice subtle physics shifts when diving underwater, with bubbles spraying up from your vehicle and even the sound becoming just a bit muted. 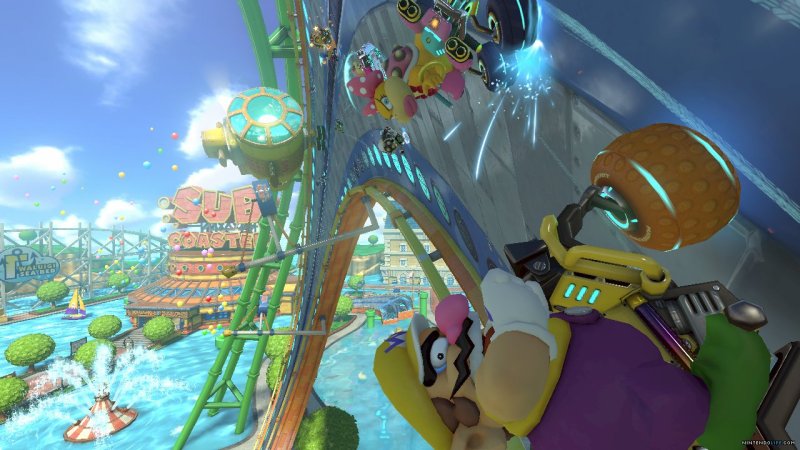 There’s a wide variety of cars, with the ability to customize to your heart’s desire. You can choose karts, ATVs, dirt bikes and more, and customize what type of tires, and what type of glide decoration. Everything has an effect on the way your vehicle performs, leading to some tough decisions: Will you sacrifice speed for handling? Or perhaps acceleration for weight? The more coins you gather, the more vehicle options you unlock.

The characters have unique properties as well. Characters like Mario and Daisy are balanced for new players, while light characters such as Shy Guy and Baby Rosalina will be slower but have better handling. Heavy characters, such as Pink Gold Peach and Wario, have the highest speed, but low handling and acceleration. New to Mario Kart 8 are the Koopalings. For once, you can play as Bowser’s kids and really show the Mario clan who’s boss.

There’s two ways to play the game: Stick or tilt controls. Using the tilt function is harder to control, but offers a new challenge if using the joysticks becomes too easy for an expert player. If you do end up using the tilting mechanism, be aware that it is extremely sensitive, whether you’re using the GamePad or a sideways Wii controller.

The stick controls, however, are a fresh breath of air. Out of any Mario Kart game I’ve played, Mario Kart 8 has the smoothest controls, hands down. Drifting has never been easier, which is a blessing as it is essential to win the harder races. And while the 50CC is easy, jumping into the 100CC, the 150CC, or even the online multiplayer means you’re going to be pulling out every stop. There’s a great range of accessibility for all players, ranging from the five-year-old playing for the first time to the Nintendo fan who’s played every Mario Kart to date.

Even collecting the coins can affect how your race will fair. Sometimes, that little speed boost from having ten coins can be all that separates you from the guy on your tail.

With 16 remastered classic tracks, and 16 new tracks, there’s a wide variety to chose from. Favorites like N64 Rainbow Road, SNES Donut Plains 3, and Wii Grumble Volcano return, joining new courses such as Water Park, Twisted Mansion, and a new Rainbow Road to make you cry manly tears as you repeatedly fall off the course.

The multiplayer is both disappointing and pleasing. For those that enjoyed the Battle Mode of previous games, well, that’s been replaced. Instead of driving in an arena setting, you’re placed on one of the game courses, with half the track going on way, the other driving the opposite way. My first try at Battle Mode left me disappointed, and frustrated as I repeatedly only got Green Shells, while the NPCs all received differing power-ups. It’s a linear, boring experience compared to what I remember from the golden boy N64 version.

The local co-op is about what you would expect. You and up to three friends with Wii controllers and nunchucks, Wii U Pro controllers, Wii Classic controllers or the Wii steering wheel with Wii controllers can play together. The variety of accepted controllers is pleasing for players with a variety of play styles. The splitscreen can cause the game to look a bit squashed, and it’s a bit disappointing that the GamePad couldn’t be utilized for the multiplayer. The framerate can also get lowered depending on how many people play.

The all-star of  multiplayer is the online matchmaking. What? A Nintendo game that does online play well? Yup, it’s finally happened. The online matchmaking actually works fairly quickly, depending on your internet connection. You can group up in a lobby with some of your friends, or you can just play with random hooligans all over the world. You gain or lose points based on your ending position in the races. I really enjoyed the online multiplayer more than I thought I would, and was actually disappointed that I had to set down my controller and stop matchmaking to write this review.

The last addition in Mario Kart 8 is the Mario Kart TV. Nintendo has decided try their hands at a video editing service, and while that sounds exciting, it’s fairly lackluster. You can upload a 30 second clip of highlights from one of your most recent 12 races to either the Nintendo community or YouTube. While viewing, you can play around with some slo-mo/fast-forward features, but that’s about it. There’s no way to add music, to mash clips together from different races, or even add voice overs.  What’s sad is that you can’t actually upload your slo-mo videos from Mario Kart TV. Sorry, Derpy Kong fans, you’re going to have to work for your derp moments.

Mario Kart TV was a great idea, and shows that Nintendo has some great potential, but it’s lackluster in features and customization. Hopefully we’ll see a more advanced version of this in the future.

Thankfully, plenty of people have found ways around that to give us classics like the Luigi Death Stare.

Overall, Mario Kart 8 delivers. While there’s room for improvement, these minor things can be overlooked for the overall fun and challenge of the game. It’s great playing by yourself, online, or with a group of friends and a bottle of Fireball. The controls are fluid, the gameplay is hectic, yet smooth, the music is engaging, and it’s really everything we could have wanted from a Mario Kart game. Hopefully with time, Nintendo will give us a better battle mode and better customization options for Mario Kart TV, but for now, there’s plenty to unlock, and a rich, full game to enjoy. 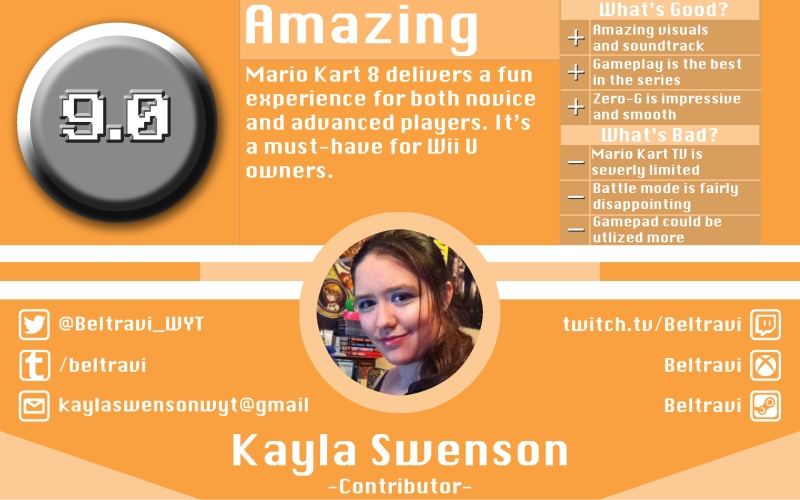 Kayla Swenson is an aspiring author and former DJ from Seattle, WA that procrastinates far too much with video games to get a book out. When she’s not gaming until carpal tunnel sets in, she’s working on dreams of being a voice actor as well as a published writer. Follow her on Twitter @beltravi, Tumblr, or email her at yunie.swenson@gmail.com. Go, go, TEAM XBRO!