Microsoft‘s ID@Xbox program continues to deliver the goods, as Zombie Driver Ultimate Edition not only provides all of the vehicular carnage found in the Xbox 360 and PS3 release, but brings updated visuals and additional content exclusively to the Xbox One.

Zombie Driver started out as a 2009 PC game, but was eventually remastered for the Xbox 360 and PS3 in October of 2012 as Zombie Driver HD. Polish developer Exor Studios has since taken advantage of the ID@Xbox program to help bring the most comprehensive version to the Xbox One, dubbed Zombie Driver Ultimate Edition.

Zombie Driver Ultimate Edition could best be described as a combination of the vehicular combat in Twisted Metal, the top-down camera views found in the original Grand Theft Auto, and the zombie infested cities of Dead Rising. The four hour campaign is fairly cliche and offers nothing new, as a government accident resulted in an entire city being turned in to zombies, but completing objectives will unlock new cars, upgrades, and in-game currency used to turn your common vehicles in to speedy death-machines. 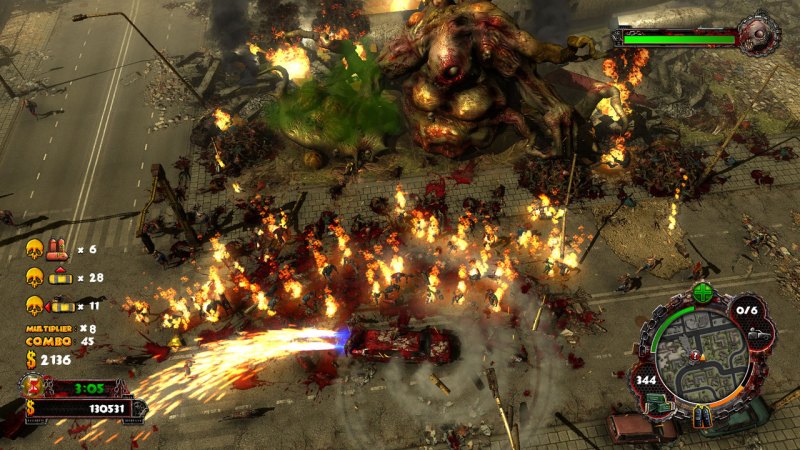 As the titular driver you’ll assist the military in rescuing survivors, destroying zombie hives, and securing zones to build new bases of operation. Unfortunately with so little variety in its mission structure, Zombie Driver‘s campaign constantly suffers from repetition, as you’re often just driving to a point on the map, clearing the area of zombies, and then driving the survivors back to base camp. Every so often you’re tossed in to a giant tank or a bulldozer to bring the pain, but it’s few and far between. That’s not to say the campaign is boring at all, as it’s hard to be bored when you’re mowing down zombies while igniting them with a mounted flamethrower, but variety is definitely not its strong point.

Controls are tight and responsive, and combat is made easier with its top-down camera view options, although each vehicle seemed to either control exactly the same, or similarly enough that I didn’t notice. Navigating the city can be troublesome as well, as sometimes I had difficulty differentiating between objects I could drive through and which ones would stop me dead in my tracks, especially when using the faster vehicles or playing through the night missions. Neither of those complaints are deal breakers, as I still had a lot of fun playing through Zombie Driver Ultimate Edition‘s campaign. 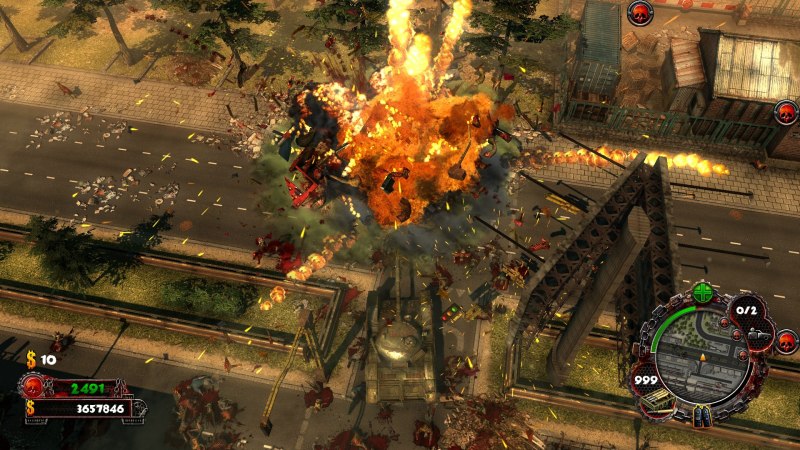 Outside of the campaign, you still have two additional game modes to enjoy with Blood Race and Slaughter. Just as the name implies, Blood Race removes zombies as the central focus and pits you against A.I. opponents in a variety of ways. In one race I found myself jockeying for position in a standard 4-lap competition, but the next race was all about destroying my opponents with mounted weaponry, or turning your vehicle in to a bomb, where the only way to survive is to reach checkpoints. Oddly enough, Blood Race doesn’t offer any form of multi-player, whether it be local or online, and racing against the A.I. was only fun for about an hour. Money earned in Blood Race mode does allow you to purchase new vehicles and use them during the campaign, so there is definitely incentive to muscle through it, even if it isn’t your cup of tea.

Slaughter is basically a horde mode, where your goal is to survive endless waves of the undead in a small section of the city. Each wave adds a larger number of zombies, as well as more frequent power-ups and healing points to make things more balanced than they were in Zombie Driver HD. Slaughter is hands-down my favorite mode in Zombie Driver Ultimate Edition, even more so than the campaign, but I still feel that the overall lack of co-op is a missed opportunity. Having the ability to co-op Slaughter with my Xbox Live friends would have made it worth the price of admission by itself. 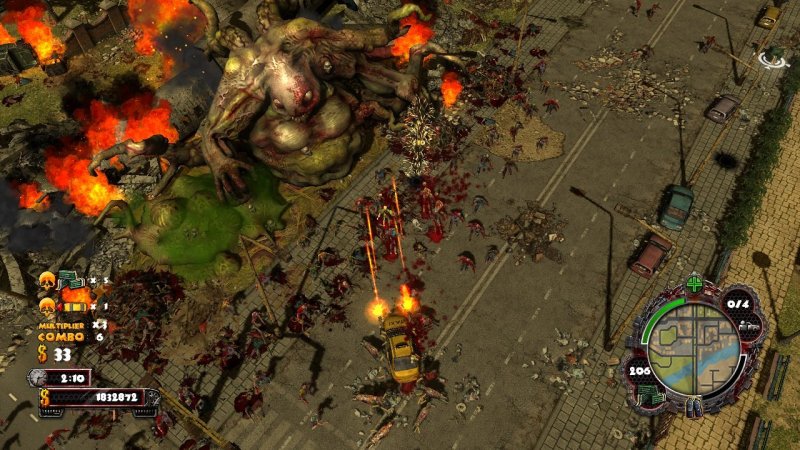 If you’re already familiar with Zombie Driver HD, the Ultimate Edition may not provide enough of a change to warrant the $14.99 price tag, but anyone looking for something a little different should definitely give it a shot. Although the four hour campaign can often feel repetitive, there’s enough variety in its game modes and enough content to unlock that it keeps things fresh. I enjoyed my time spent with Zombie Driver Ultimate Edition, but I can’t help but think of what could have been a fantastic multi-player experience with infinite replay value, especially in Slaughter mode. Still, it’s far different from anything else on Xbox One right now, and you can’t ask for more in an exclusive. 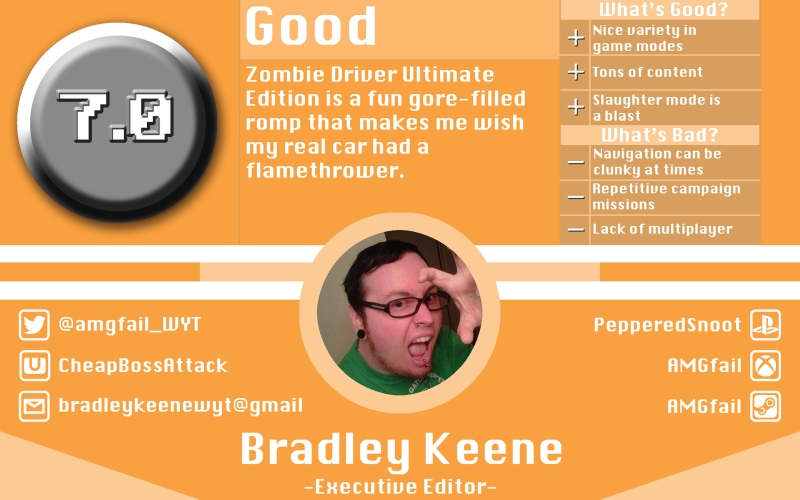