Few genres are as timeless as the arcade shoot-em-up, and Argentinean developer OPQAM looks to combine that feeling with the intensity of modern bullet-hell gameplay in their latest release, Project Root. As rebel pilot Lance Rockport, you’ll uncover the secrets of the world’s largest energy provider. Your motive? Revenge. After your hometown was swept away by the Prometheus Corporation’s expansion plans, who better to expose their corruption than you?

Although Project Root sets the stage with a bit of story, it ends up being fairly cliche and takes a back seat to the action. The absence of voiced narration makes it even easier to ignore the story altogether. It’s hard enough to survive in a bullet-hell shooter with thousands of hate-fueled projectiles heading your way, so OPQAM‘s decision to go text-only in the middle of a firefight is baffling. Thankfully what matters most is the gameplay, and that’s really where the game shined the most for me. 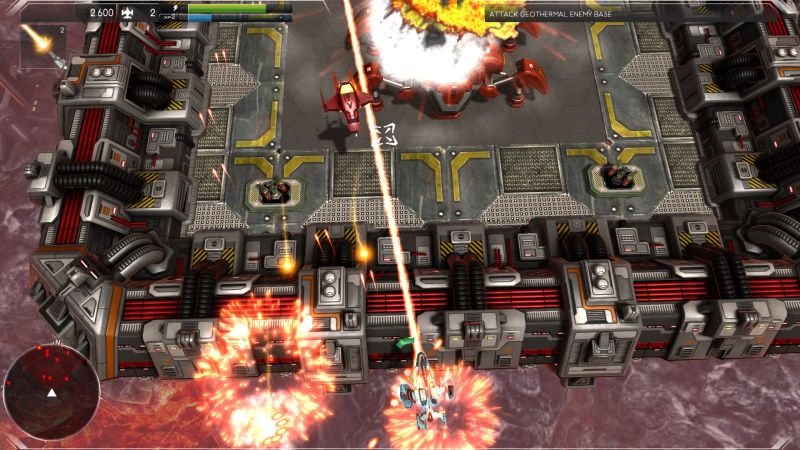 Controlling your F-72 ZONDA is basic, but it’s responsive and fluid; especially when using an Xbox 360 controller. Using your left analog to move and strafe while rotating the map with the right, you’ll bob and weave your way through air strikes and a healthy supply of ground units. To combat this, your ship can use both ground and air attacks. In typical shooter fashion, you’ll also stumble upon random power-ups like EMP’s to ditch enemy homing missiles, a massive laser beam to cut through flying enemies, or a swarm of rockets.

Most bullet-hell shooters are on-rails. Where Project Root differs is its open 360 degree environment that’s yours to explore, offering a decent variety of mission objectives along the way. Sure, it can get a little too “destroy this” or “defend that” at times, but its level design and goals were varied enough that it never grew tedious. There was always enough going on on-screen that I never had a chance to sit back and grow bored, which is great since repetition is usually par for the course in a shoot-em-up.

Another aspect of the game that differs from a standard arcade shooter is its upgrade system. Completing each level awards you with XP and allows you to upgrade your ship’s offensive and defensive capabilities, ammo capacity, and handling speeds. Each upgrade was noticeably apparent as well, especially when choosing to make my ship more agile or take more damage.

Where Project Root may deter some is its steep learning curve, which is made unnecessarily difficult at times due to off-screen fire. Off-screen attacks are purely luck based if they come from the bottom, as that’s where your ship is positioned. There is an in-game radar that you’ll use often to track objectives and get the jump on your attackers, but your ship’s default position just welcomes rear fire with open arms and leads to many, many deaths. If you find Project Root too difficult there’s an easy mode you can attempt, but if you have any sort of history with shoot-em-up’s you’ll grow bored rather quickly due to its lack of challenge. It’s the perfect way to get your feet wet, but I found the normal setting to be more balanced and enjoyable.

Project Root also has a below average soundtrack, generally looping the same uninteresting tracks over and over again. I personally prefer fast paced electronica in my shmups, since it seems to fit well with their frantic, twitchy play style, but the lack of an interesting backdrop sent me right to my media player to create my own playlist. Certain sounds within the game are also questionable, like explosions resembling muted thuds one minute and going full-on Michael Bay the next.

Overall, Project Root is a solid combination of bullet-hell intensity and frantic arcade shoot-em-up gameplay. It’s not without its fair share of faults though, namely its unenthusiastic soundtrack, poor use of text-based story development during hectic firefights, and lots of unnecessary deaths in the name of off-screen fire. The dated graphics also stand out quite a bit, but Project Root‘s responsive controls, solid upgrade system, and fun, hectic gameplay make it worth your time if you’re a fan of the genre. It’s not perfect, but the good definitely outweighs the bad.

Recommended for fans of: Arcade shoot-em-up’s and bullet-hell shooters. I was also reminded of the older Nuclear Strike and Soviet Strike games on PSone, but I’ve seen it compared to Choplifter, Assault, and Steel Storm.

*This review is based on the recent PC version released in May 2014. Project Root is also scheduled to release on the Playstation Vita in the future, but unless we find significant differences between each version, consider this our definitive review.

Bradley Keene is the Executive Editor here at What’s Your Tag?, generally handling news, reviews, and a bit of our public relations communications. He’s an aspiring video game journalist and Baltimore native that can usually be found watching terrible B-movies or knee-deep in a roguelike, a horror game, or some sort of point-and-click adventure. His favorite console is the Dreamcast, favorite game is the original Metroid, and he could watch The Goonies for the rest of his life. Contact him by e-mail at the address above, or follow his insanity on Twitter.