Shadows on the Vatican is a four-part episodic point-and-click adventure series. In its first act, Greed, we’re taken back to 1996 when our protagonist, a Vatican priest named James Murphy, witnesses the murder of his mentor during a mission in Africa. Unable to continue in the ways of the cloth, James abandons his priesthood and moves from Italy back to his hometown of Chicago, becoming a doctor instead. Fourteen years later, James’ receives an invitation to return to Rome at the request of his friend Cristoforo, who promises to have more information on what really happened in Africa. However, upon arriving, Cristoforo is violently attacked and left in a coma, leaving James to investigate with the clues he’s left behind.

As the first act in a four part series, Greed sets the stage for what’s to come. It introduces the character of James, the ex-priest who still never leaves home without his bible and never lost his faith in God, but no longer trusts the church. It throws a lot of information your way to help build its theme of Vatican corruption via questionable bank transfers and shady characters. It also introduces the player to its colorful cast of characters whom will no-doubt be of some importance as time goes on. Unfortunately what’s to be expected is exactly what occurs, as Greed feels like little more than just a build up. An interesting build up, sure, but just a build up.

I don’t say that to cheapen Shadows on the Vatican, as it’s a solid point-and-click adventure game, but it doesn’t really do anything to break out of its first act shell. Greed does have a decent amount of stand-out features though, like its nicely detailed comic book-style cut-scenes that deliver key portions of the story or segue between areas. Each of the hand-drawn segments are finely detailed, doing a better job at conveying the game’s dialogue than its visually dated 3D character models, and I kind of wished the entire game was artistically similar. In addition to Greed‘s cut-scenes, its menus, maps, character portraits, and inventory items are also hand-drawn, but developers 10th Art Studio and Adventure Productions opted to go with 3D character models and environments instead. The decision to do so is a questionable one, as every character model looks extremely dated in comparison to its crisp and clean hand-drawn segments.

Shadows on the Vatican – Act 1: Greed is fully voice acted, for better or for worse. Originally an Italian release in 2012, the translation is well done overall in the 2014 localization, but the actual voice work is pretty hit or miss. With Rome as the chosen locale, I often wondered why certain characters sounded American, like Paolo, the banker’s daughter, and Silvia, the mysterious girl introduced at the end of Act 1. James made sense as a Chicago native, but the others, not so much. Where the voice actors succeeded though is in personality, as the voice of each character made them more memorable, whether the quality of the acting was good or not.

In the usual adventure departments, Shadows on the Vatican does everything pretty well. Its clean interface makes it easy to collect and combine items, navigate them within your inventory, and keeps things uncluttered as they’re removed as necessary; along with any areas on your map that are no longer needed. Left and right-clicking inspects and interacts with objects and NPCs, and is also used to move between areas in whatever zone you’re in, but by adventure standards, Greed is small in size and rather linear. Each zone typically consists of one or two areas to navigate, and James is another one of those in a long line of adventure characters that already knows which objects are irrelevant and which rooms aren’t worth exploring. For instance, being in the church shows a hallway and a staircase; both of which James feels are unnecessary, although Cristoforo was claimed to be pushed down the stairs. Specific portions of the game only open up when they’re necessary as well, like the internet search function of your laptop, driving the linearity even further and kind of removing the adventure from adventure game.

Linear or not, Shadows on the Vatican‘s first act has enough build up to sell me on its future installments. Having such an inconclusive cliffhanger of an ending and knowing that it was just the build up act made it a little difficult to soak in all of the religious names and foreign locations, but I’m curious to see how it all plays out once James finally confronts the Vatican with the information he’s discovered. Hopefully act two improves on the linearity and digs its teeth in to the story a bit more, but continues to build memorable characters and produce quality hand-drawn cut-scenes.

Knowing that it has 3 more acts to play around with means plenty of room for improvement, and what it does wrong is really not all that bad to begin with. It has good puzzle play, considering most of the solutions makes sense; although the game’s linearity made figuring them out much easier. It also boasts a superb soundtrack full of organ music and hymns, as well as an operatic rock outro that totally caught me by surprise. Where the game really falters is in its dated visuals and character mannerisms. Most modern adventure games go the hand-drawn or pixel art route, and I think Shadows on the Vatican reminds us why. Mock the pixellated visuals of Richard & Alice, The Last Door or Quest for Infamy all you want, but 3D polygons just don’t age well and Greed proved that point with gusto. Thankfully adventure games rely on their stories more than their graphics to pull consumers along for the long haul, and there was enough going on in Act 1 that it shouldn’t lose your interest. 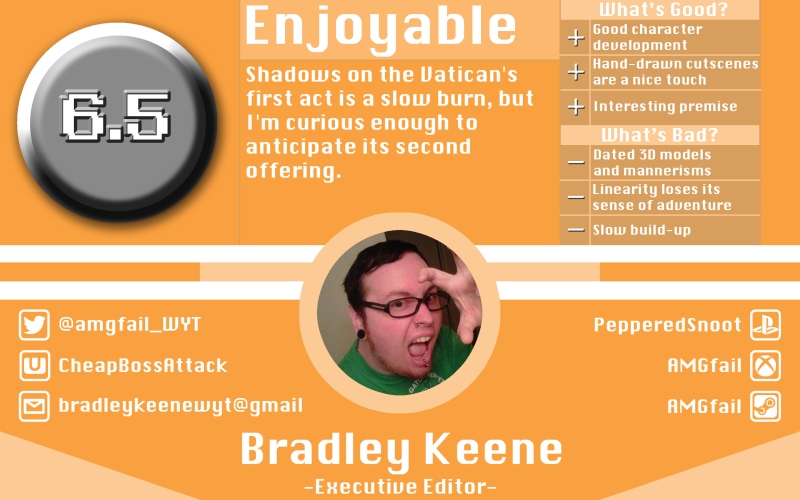 Recommended for fans of: Point-and-click mystery games, comic book art styles, religious thrillers? Do those exist in the game world?