In Team Tripleslash‘s puzzle platformer Magnetic By Nature, you control the last robot alive in a machine-aged, art deco style environment that’s governed by the universal laws of magnetic attraction. You’ll attract and repulse using magnetic way points as you find and reactivate your decommissioned robotic companions, but that’s just one layer of this delicious 2D platforming cake.

Magnetic By Nature offers a truly unique gameplay experience, inspired by games like Portal, Super Metroid, and Limbo, and actually started as a smaller condensed project on the Xbox 360 called Magnetic By Nature: Awakening, released back in April 2013. This tiny, bite-sized version of the game eventually lead to what we see today, which was successfully funded through Kickstarter the following month in May 2013. A lot of time and TLC has gone in to Magnetic By Nature, and the end result is an absolutely phenomenal platformer that fans of the genre shouldn’t miss. 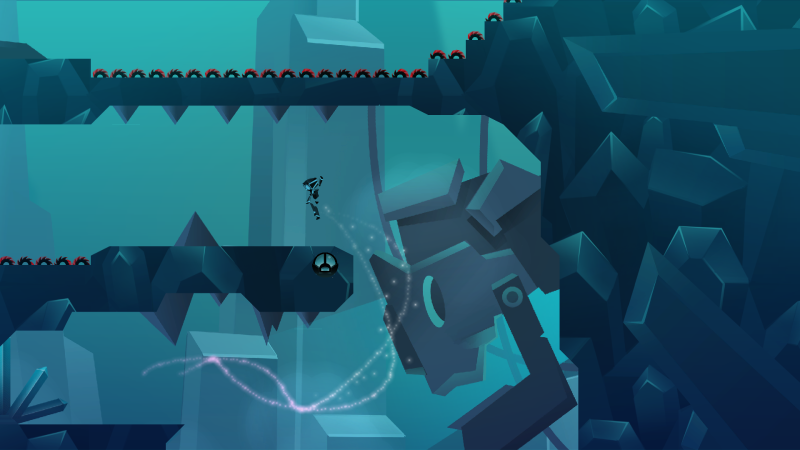 In Magnetic By Nature, you’ll navigate over 100 different levels by way of grappling, swinging, repulsing, and good old fashioned platform jumping, and you’ll need to do so with twitch-speed thinking, as one mistake will generally send you packing back to the beginning of the level after being torn to pieces by sawblades, or drowned in oil. Don’t let that scare you though, as the game is more of a well paced learning process than repeated deaths at the hand of unfair mechanics, or ridiculous tasks of trial and error.

Magnetic By Nature is definitely a challenging game, but it does such a great job of easing you in to its set of rules that you’ll gradually find yourself improving, rather than feeling like you’ve been chewing glass for hours on end. I’ve seen the game referred to as “the OUYA’s Super Meat Boy“, and while I found the game difficult at times, I didn’t find it anywhere near as frustrating as Team Meat‘s iconic platformer. It’s challenging thanks to its superb use of physics and platforming, rather than throwing out a million ways to rip your face off. That’s not a jab at Super Meat Boy, as it’s one of the best platformers I’ve ever played, but I wanted to stress that they’re both challenging for different reasons.

Each of the game’s four robots require 25 flowers to reactivate, so their respective zones each have 25 different levels to conquer. Rather than recycle the same mechanics over and over, each level continues to add on to what you’ve already learned, eventually leading you to the next zone where a new mechanic is introduced, while your older skills are put to the test. Rhapsody in Blues, the game’s first zone, teaches you how to attract, repulse, etc., and serves as a crash course in Platforming 101, but quickly introduces you to Magnetic By Nature‘s requirement of quick thinking, paving the way for the remainder of the game. I’m a big fan of pacing, and in my opinion, Team Tripleslash nailed it. Magnetic By Nature also succeeds in terms of variety, offering an assortment of levels that may look alike, but are played differently. One level may require you to zip-line down a slope before launching yourself to the opposite end where the exit is located, while the next may task you with grappling and repulse-jumping your way through underground tunnels without the luxury of a safe landing spot. Later on, another level may require you to surround yourself with magnets in order to avoid hazards, or pile them up in order to repulse-jump your way to an out of reach platform. It’s this stellar amount of diversity that never causes the game to overstay its welcome, which is a hard thing to do in the platforming genre. 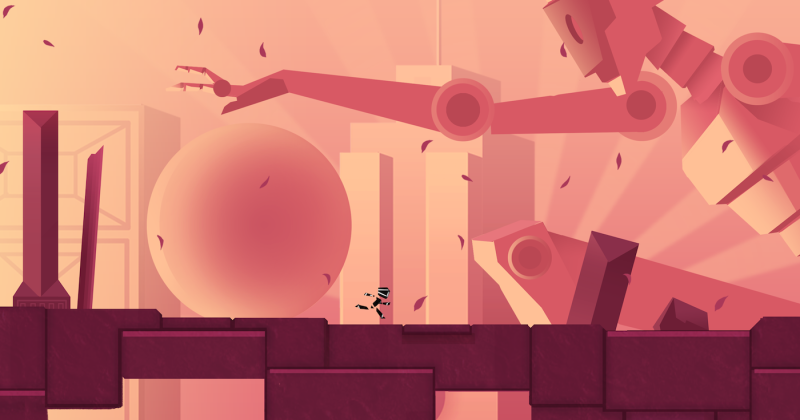 Each zone features a stunning art deco style of level design that combines so well with its rich color saturation, making it is as much a feast for the eyes and it is a pleasure to play through. You’ll navigate through mushroom-filled caves, pass by massive robotic statues within a fallen city, and platform your way inside of crystal caverns during your playthrough.

It’s a purely single-player experience, but you can easily extend the amount if time you’ll spend with the game by hunting down collectibles, or taking part in Magnetic By Nature‘s speedrun zones. I spent roughly four hours playing through the game, give or take a decent amount of time going back to grab a few hard to reach collectibles. Although the game does offer over 100 different levels to play through, many of them can feel short and can be completed in about 1 or 2 minutes. Some of the more challenging levels will have you taking a fair share of dirt naps before memorization kicks in, but the game does offer a solid amount of mileage for its $9.99 price tag. For the most part, Magnetic By Nature was everything I wanted out of a platformer, but I did find the controls to be a little on the floaty side, at least during the ground portions. The slightest flick of my analog stick would send our robotic hero in that chosen direction, but would do so in a long stride that sometimes made lining up repulse-jumps a bit of an issue.

Since you spend so much time platforming without actual platforms, this isn’t a major concern, and from what others have said, it’s not so much of an issue when using an Xbox or PS3 controller instead of the stock OUYA version. Since I played through the entire game using the OUYA controller, I can’t confirm or deny that’s the case, but still felt it was something worth mentioning for those of you who don’t have an alternate option to pair up with your console. 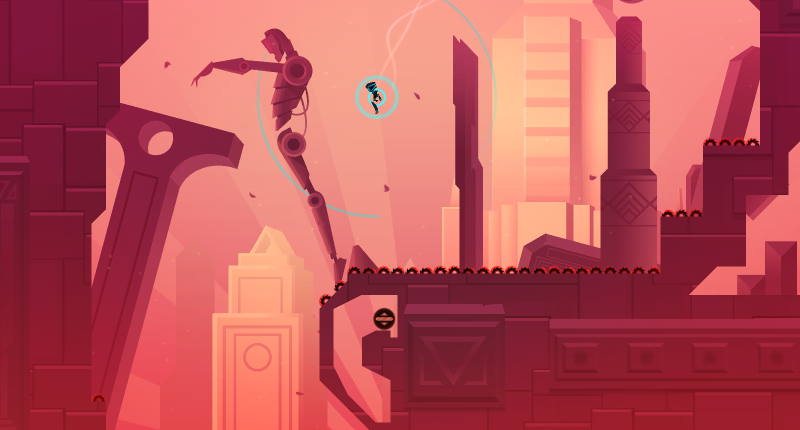 Overall, Magnetic By Nature is a rock solid puzzle platformer for OUYA owners to enjoy. A game this stellar deserves the biggest audience possible, and while I know it’ll do fairly well on the OUYA, I’m pretty certain it’ll garner more attention when it eventually releases for PC, Mac, and Linux at some point. Its gameplay is masterfully executed, the art style is probably my favorite in any game released in 2014 so far, and I can confidently say that it stands tall with other fantastic games in the platformer genre released this year, like So Many Me, The Floor is Jelly, Strider, and Shovel Knight. Team Tripleslash has developed a truly amazing game in Magnetic By Nature, and it’s one that everyone should pay attention to. Not just OUYA owners. 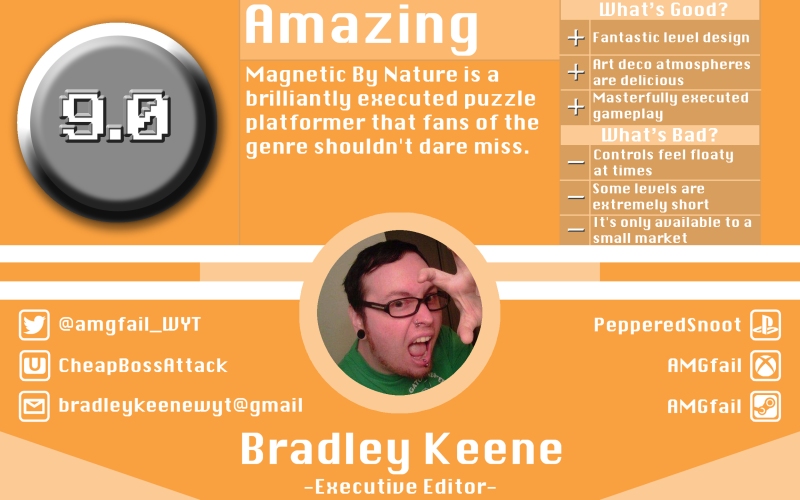 Recommended for fans of: Portal, Limbo, VVVVVV, Super Meat Boy, Super Metroid, So Many Me

*This review of Magnetic By Nature is based on the OUYA version, which released on August 20, 2014. It is currently an OUYA exclusive, but will eventually make its way to PC, Mac, and Linux. Unless we find significant differences between each version, consider this our definitive review.