After a successful Kickstarter campaign in 2013, The Fall has finally made its way to the Xbox One this month by way of the ID@Xbox self-publishing program. It’s a 2D sci-fi point and click adventure game that feels like a cross between Limbo, Blackthorne, and Monkey Island if they were all written by Philip K. Dick. There’s tough puzzles to solve, creepy environments to explore, and a lot of great dialogue between characters, but what really brings it home is the phenomenal writing and storytelling that culminates in to one of the most bizarre and thought provoking endings I’ve experienced in a long, long time.

The story begins when an unconscious pilot crash lands on a mysterious planet, awakening their combat suit’s on-board AI. Known as ARID, her primary function is to save the human occupant at all costs–within the limitations of her programming. ARID also quickly discovers that she’s not the only AI on board, and yet without human emotions manages to forge relationships with the others in a rather interesting Blade Runner sort of way. With a menacing “caretaker” overseeing the reformatting of disobedient AI, survival is your top priority. Is it possible for a computer to change, to adapt, or will they always conform to protocol?

“The overall atmosphere is really incredible, accompanied by an amazing soundtrack full of uneasy, ambient sounds that beg you to play with a set of headphones on.”

The Fall is the first of a trilogy, but it doesn’t play out like an episodic adventure game like The Walking Dead or Life is Strange. Generally the first episode of any adventure exists purely to build a foundation, introduce characters, and leave enough breadcrumbs to draw you in to future installments. The Fall definitely succeeds there, but also manages to deliver a compelling story that completes the game, rather than feeling like a simple opening chapter.

The writing is smart, catering to my soft spot for science fiction and dark humor with its slow burn pacing and frequent guess work. I was a human in control of an AI suit, and no matter how much I wanted to think as a human, I was still confined by ARID’s own set of rules; and the dialogue never, ever let me forget that. At no point did I ever feel that Over The Moon was pulling any punches or withholding information that would leave me with a crummy cliffhanger after five hours of hard work. My time was respected, and I always appreciate that. 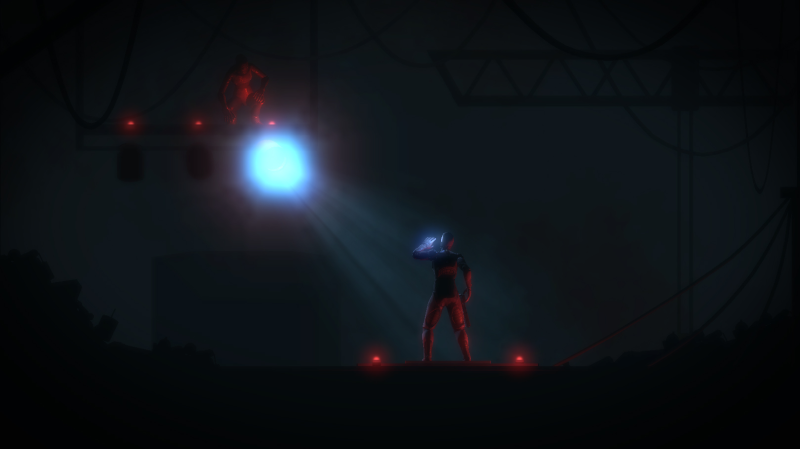 I spent a majority of the game navigating corridors and reading documents while collecting various items to use in the environment in order to solve a plethora of brain bending puzzles. This is the type of game that encourages you to scour wall to wall, reading everything in order to make heads or tails of the situation blocking your path.

The solutions weren’t always in plain sight either, forcing me to think outside the box, but that doesn’t always mean they made sense. There was one instance that baffled me when I had go up two floors just to insert fish guts in to a shower in order to bathe myself with their scent, instead of just applying them with my own hands. There were other times when I felt clueless, pacing aimlessly back and forth between areas, hoping to stumble upon something I might have missed the last 14 times, but that A-HA! moment when it all finally clicked was extremely satisfying.

The Fall presents a fairly competent combat system as well. Your single-shot pistol eventually becomes a rapid fire killing machine, but it’s easy enough to line up well placed headshots by switching your flashlight to a laser scope and aiming with the right analog stick. Your combat suit is also equipped with a cloaking device that can be used to avoid gunfire, and with a simple press of the left bumper you can duck behind objects in the environment to trade rounds with security bots. The first few encounters took some getting used to, but once I got my feet wet I looked forward to opening fire or delivering stealth kills any chance I got. With that being said though, The Fall is definitely an adventure game, not a shooter, and I’m glad the game was built around exploration, puzzles, and storytelling, rather than its infrequent gun play.

Graphically, The Fall is visually similar to The Swapper, which clearly had the same influences. Since most of the game takes place underground, it’s to be expected that you’ll spend a lot of time illuminating the darkness with your pistol’s flashlight by using the right analog stick. Your flashlight is used to highlight objects in the environment, so it’s more of an aim-and-click mechanic, and while braving the darkness was often exciting, trying to lock on to icons in the background was somewhat troubling at times.

Sometimes the darkness felt a little overwhelming, hindering my ability to locate key items on the first pass, but the contrasting neon glow of computer screens, buttons, and exploding fungi prevented the dull tones from becoming too repetitive. The overall atmosphere is really incredible, accompanied by an amazing soundtrack full of uneasy, ambient sounds that beg you to play with a set of headphones on.

Overall, The Fall is a really solid adventure with a lot of creepy environments to explore, and well voiced dialogue between its interesting cast of characters. I didn’t expect its dark humor, which was a pleasant surprise, but the star of the show is easily the writing. It’s well paced, smart, and brilliantly written in such a way that I never saw the finale coming, and I really couldn’t have asked for more in an adventure game.

Recommended for fans of: Point and click adventure games, sci-fi, The Swapper, Whispering Willows (in terms of its inventory and control scheme, not so much the subject matter).

*This review is based on the Xbox One version of The Fall, which is also available now on Playstation 4, Wii U, and PC.