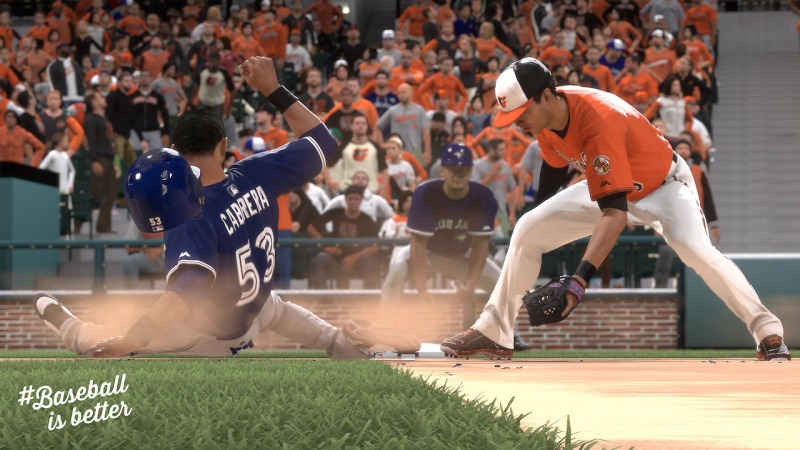 MLB 14: The Show released on April 1st for the PS3 and Vita consoles, but PS4 owners had to wait until May 6th to sink their teeth in to Sony San Diego‘s award-winning baseball sim. Was it worth the wait?

When MLB 14: The Show released for PS3, one major complaint was the instability of the online modes. What would have otherwise been a dream come true with the online Franchise Mode was hampered by constant lag issues. Unfortunately not much has changed with the PS4 version in that aspect, as online modes are still laggy and suffer from some untimely frame-rate issues.

If you’re interested in upgrading to the PS4 version, another thing to keep in mind is that you won’t be seeing any new game modes. I see this as a good thing, as it’s a testament to the amount of quality Sony San Diego put in to the PS3 version. What you will get is a hefty visual upgrade in the form of more detailed ballparks and athletes, and a significant increase in lighting effects. The crowds also look a hell of a lot better and feature 1,000 different models as opposed to the 30 or 40 found on the PS3 and Vita. 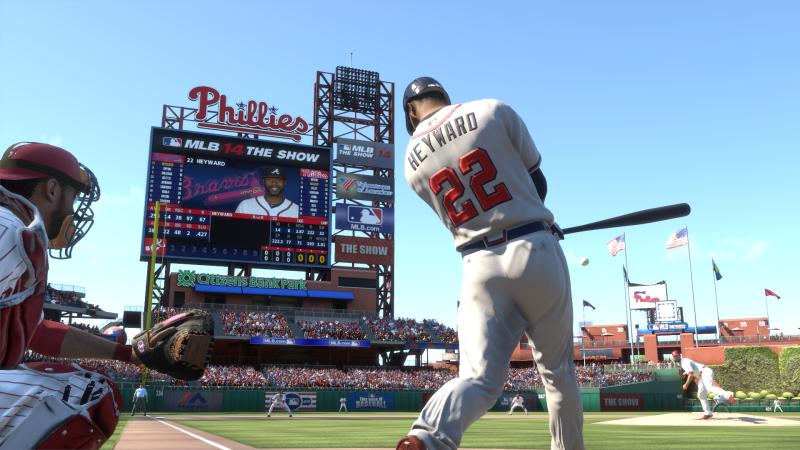 If you’re picking up MLB 14: The Show for the first time, it comes chock full of different online and offline modes, like the usual exhibitions, season, franchise and home-run derby (which allows you to swing against your friends, regardless of their console of choice), and also features new community challenges that are created by the player base.

Baseball is often criticized for being slow paced, and even as a diehard fan of the sport, I completely agree. I’ve been to countless games in my life, but sometimes you just want things to move along a little faster, especially when you have a pitcher out on the mound that has some absurd routine between every pitch. For those of you short on time, MLB 14: The Show introduces a few new ways to slim down the amount of time you’ll spend in each game, with Quick Counts, Fast Play and the Player Lock options.

Quick Counts compiles two years worth of batter/pitcher data from MLB.com and uses that information to put you deeper in to a pitch count each time you visit the plate or throw from the mound. For instance, you could head up to the plate as Prince Fielder and immediately be on the receiving end of a 1-2 count. This will always cause you to rethink your approach as you’re already under pressure from the get-go. Of course you could also be pitching against Miguel Cabrera in a 3-0 position, so you’ll have your work cut out for you either way. While I wasn’t too fond of quick counts — as I enjoy having full control over my own games — I can appreciate what it’s trying to do by simulating the pitcher versus batter battles and saving us all some time.

By default, MLB 14 is set for Broadcast play, meaning that it’s supposed to resemble a television broadcast as much as possible. You’ll see everything from warm-up pitches, practice swings, home run replays and visits to the mound, which all add a ton of realism to the game. Fast Play allows you to skip all of the theatrics and get right down to baseball. The average game for me usually lasts around 50-60 minutes, but opting to go with Fast Play dropped it down to 30-40.

If you’d like to save even more time, you can use the Player Lock feature, which allows you to assume the role of one player and simulate any action that doesn’t involve them. You’ll basically handle each at bat and whatever fielding jobs may come their way, and while it was an interesting idea, I just wasn’t a fan. Then again, I still prefer to play every single game of my season in Broadcast mode and skip ahead using the X button whenever I want to rush things along. Even though I rarely used any of the time saving features, it’s still nice to know that if I want to squeeze in a quick game for my Baltimore Orioles season and I’m short on time, I have a few different ways to go about doing that.

Road to the Show is still what you’ve come to expect, as you’ll create your player and follow them throughout their career, but you can now model their play-style after the professionals. This makes it much easier to progress your character instead of relying on lackluster drills or possible piss-poor performances pre-draft. I had an easier time with Road to the Show this time around, but it still has a ways to go in comparison to NBA 2K14‘s My Career.

Graphically, MLB 14: The Show on the PS4 looks completely gorgeous.. for the most part. While developer Sony San Diego did an amazing job adding in a slew of new catcher animations and batting stances, their attempt at long hair is mind bogglingly terribly; somewhat resembling the stiff haircuts you’d see on a create-a-wrestler in the latest WWE game. You won’t see it often, as it’s rare to see baseball players with long hair as it is, but once someone like the Nationals’ Jayson Werth steps up to the plate, their spaghetti hair sticks out like a sore thumb. That’s not to say that all long hair looks terrible, as the Pirates’ Andrew McCutchen and the Orioles’ Jemile Weeks sport some lifelike dreadlocks.

From a fan’s perspective, I absolutely love The Show as a series, so picking it up every year is a no-brainer. If you’re new to the series or not a huge fan of baseball, there are a hefty amount of options you can control to make the game as easy or as hard as you want. Sliders control everything from the probability of actually hitting the ball to the chance your players will make a fielding error, so you can ease yourself in to the sim at your own pace. It took me a few games to find my comfort zone, but it’s nice to go back every so often and make things just a little more challenging than they were two or three games ago.

MLB 14: The Show is another must-own game for the PS4, especially if you’re a fan of baseball. With 2K Games no longer spitting out mediocre baseball games on the Xbox, I can see the baseball diehards picking up the PS4 just to play The Show year after year. And that’s fine, as Sony San Diego has already confirmed that your data will transfer to future releases, giving even more incentive to replay franchise or season multiple times. If you’re looking to spend most of your time online though, keep in mind that lag and frame-rate issues are still a thing and will definitely cut in to your enjoyment a bit.

I love the Baltimore Orioles and I’ve been to Camden Yards more times than I can count, and seeing how they brought the stadium and my favorite players to life in MLB 14: The Show was an amazing feeling. Baseball is America’s greatest pastime, and this is a game I need every single year.

Recommended for fans of: Sports games or baseball in general.