I wish LA Cops was good. I don’t usually start these things out with such a negative statement, but LA Cops was a recipe for something awesome that unfortunately suffers from awful gameplay, cheap “gotcha!” deaths, and one too many donut jokes to make it even remotely enjoyable. Unlike the campy 70’s cop dramas it’s inspired by, it’s not so bad that it’s good. It’s just really, really bad.

It’s a top-down isometric shooter in which you choose from a list of police officers with varying stereotypes in order to arrest the bad guys, or paint the walls with their brain matter, across 8 different missions. What starts out as a heartbreaking scene in which one of the cops is being left by their wife, eventually turns in to a funny-haha hostage rescue at a donut shop. Get it? Because cops like donuts. It’s here that I was introduced to the game’s buddy-cop mechanic, arrest system, and the hellish combination of clunky controls and unpredictable A.I. that became a mainstay for the next few hours.

“There’s just no fun in blindly walking in to a room and getting shot up because of shoddy camera work, which essentially punishes the player for the developer’s poor design choices.”

You’ll start each mission by choosing which two cops to partner up, all of which initially offer different weapons and statistics, like health pools, speed, damage, and clip size. Any sense of self flies out the window though, as they’re all equally obsolete within an hour. Depending on your clearing rank, you’re awarded points after each mission to allocate in the aforementioned stats, and any character can be maxed out rather quickly by replaying older levels. This wasn’t done out of enjoyment, but rather necessity, as it became readily apparent I wasn’t going to make it further otherwise. With their stats capped, each of the cops played identically with nothing to set them apart aside from their visual stereotypes. If they all had a unique special ability that stood out, like a bulletproof vest that soaked up more damage, or slowing down time when things got dicey, that might have helped define them as characters and maybe made the game a bit more fun overall.

Difficult games are nothing new, and the good ones always find a solid balance of being as much of a challenge as a learning experience. In Dark Souls, you learn enemy placement and attack patterns, and use that to your advantage. In 1001 Spikes, you die constantly while learning the lay of the land. Even procedurally generated games like Spelunky, or Binding of Isaac, still feel fair, but in LA Cops, the A.I. is so unpredictable that it only ever feels like a chore.

“Gotcha!” deaths are never enjoyable, and there’s plenty of them here. There’s just no fun in blindly walking in to a room and getting shot up because of shoddy camera work, which essentially punishes the player for the developer’s poor design choices. I frequently pulled a swarm of guys with guns sitting just out of range. If that occurred and I knew on my 2nd attempt that they’d be there again, that’s one thing, but none of them have a specific pattern. One might be aimlessly patrolling the other side of the room instead, while the other three were nowhere to be found. During one of my many donut shop hostage rescues, one of the bad guys walked in a tiny circle for 3 straight minutes before finally veering off path, while all three in the last room “patrolled” by staring at the wall all lumped together. 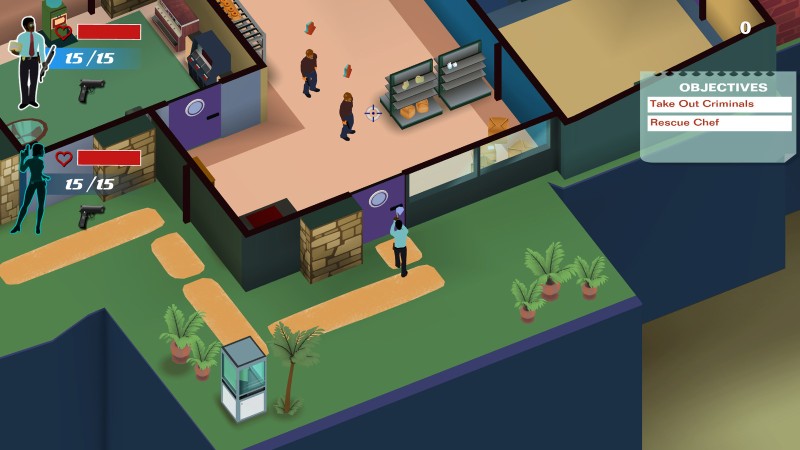 It’s times like that that really took away from the game, as not knowing how the A.I. was going to react generally favored blind shootouts instead of systematically arresting people for higher scores and increased XP gains. This problem is exacerbated during the later missions when rooms are jam packed with guys just waiting to fill you with bullets, and your only assistance is a brain dead partner who only exists to fire off a round or two before taking a dirt nap. What LA Cops wants you to do is strategically place your partner in a position that provides cover fire, or in such a way that allows you to lure enemies in to your trap. More often than not, however, the partner of my choosing would watch as I pulled Generic Enemy #1 in to their line of fire, and then proceeded to take three shots to the face.

Everything is controlled in a classic twin-stick manor, maneuvering your character with the left stick while aiming with the right. Tactically moving your partner is an agonizing and unreliable experience, since you have to aim at their destination with the right analog stick, then take your thumb off in order to execute the command with the A button. I’m not sure if the developers know how frustrating this is on a controller, as once you remove your thumb, the analog stick immediately locks back in to place. Rarely, if ever, did I feel in control of my partner, and I usually just gave up on the idea altogether. This could have been fixed by offering co-op play, whether it be local or online, but, alas, you’ll be suffering through this one alone.

“Its frequent spikes in difficulty are largely due in part to the unpredictable AI, feeling more like a chore than a learning experience…”

Gunplay is equally rocky, as LA Cops also features a lock-on system similar to that found in Hotline Miami. It worked as intended against a minimal amount of targets, but having to press X to lock on again after each killshot made it somewhat impossible to stand a chance against 3 or more; even when using more powerful weapons, like assault rifles and shotguns. You can also forget about blind-firing with the right analog, as it’s essentially useless. There’s an option to arrest targets with the left trigger, but the aforementioned AI unpredictability made landing an arrest more luck than skill.

Here we have an incredibly short game with loads of potential, pending you can overlook the unnecessarily frustrating AI and gameplay quirks, but aside from its cheesy crime drama aesthetic, I didn’t find much to like at all. It’s a bit like Hotline Miami, although nowhere near as fun or polished, and the cheesy cop story never evolves beyond a cliched donut joke. Its frequent spikes in difficulty are largely due in part to the unpredictable AI, feeling more like a chore than a learning experience, and the clunky control scheme buries the tactical partner mechanic from the get-go. Even the roster, while being nothing short of a list of stereotypes, is dead on arrival once you’ve allocated a few upgrade points. In what could have been a fun buddy-cop experience, LA Cops is nothing short of being a disappointing time waster.

Recommended for fans of: Hotline Miami or Reagan Gorbachev, although both of those are vastly superior options.

*This review is based on the Xbox One version of LA Cops, which is also available on PC via Steam. While we didn’t get to experience the PC version, we’re confident in saying that it probably feels more natural with a keyboard and mouse, as opposed to using a controller. Unless we find more significant differences between each version, consider this our definitive review.